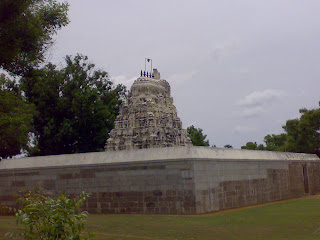 It is said that the village got its name as Gold was harvested in fields in the ancient days. Presently, the name of the village is shortened as PV Kalathur. Great poet Pugazhendhi Pulavar, who wrote Nalavenba was born here. One of the 63 Naayanmaars called Sri Kootruva Naayanar is also said to have lived in this village.

PV Kalathur has a small yet wonderful temple for Lord Shiva. The main deity here is called as Sri Munkudumeeswarar (முன்குடுமீஸ்வரர்) and Goddess Sri Meenakshi Amman. The temple was built by Rajendra Chozhan.

The legend of the God here is too unique and interesting. There lived a king who was ruling this part of the country in ancient days. He was an ardent devotee of Lord Shiva and had a habit of getting Prasaad (Prasaadham) from this temple every day before starting his routines. 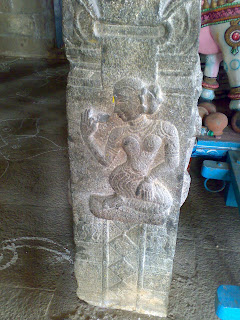 The queen liked the fresh flowers on the plate and out of curiosity took the flowers and wore on her head. The priest was shocked and told the queen that the first Prasaadham from the temple is meant only for the king and grabbed the flowers from her head and kept them back on the plate.

The king arrived and accepted the Prasaadham with much devotion. But he was shocked to see a single long hair stuck with the flowers of the temple. The king got angry and asked the priest on how the hair got mixed up with flowers from the temple and whether the Lord had a long hair. The priest got frightened as he cannot tell the king that the queen was the responsible for it. At the same time, he had to answer. So, the priest told the king that the Lord in the temple has a long hair and hence the flowers taken from the Lord’s idol had a hair mixed up among the flowers.

The king couldn’t believe it and told that he will visit the temple the next day morning during the Pooja and if he doesn’t find the hair on the Lord, the priest’s head will be cut off.

The priest returned to the temple, cried and prayed the whole day in front of the Lord to save him from the king’s punishment.

The next day both the priest and the king arrived at the temple for morning Pooja. When the priest opened the doors of the sanctum to start the Pooja, he was astonished to see a tuft near the forehead of the Shiva Lingam. The priest was in tears realizing the mercy of the God to whom he was doing Poojas with full devotion. The king, on seeing the tuft apologized with the priest for suspecting him. As the Lord has a tuft (Kudumi) towards his forehead He came to be known as Sri Munkudumeeswarar. Even today, we can witness the tuft on the Lord’s (Lingam’s) head.

The temple is situated on a vast area amidst the paddy fields in the calm village. The temple is now protected and maintained by Archeological department and is very neat and clean.

Sri Munkudumeeswarar is bold and beautiful and is facing the east. Sri Nandhigeswarar is seen present in front of the sanctum. 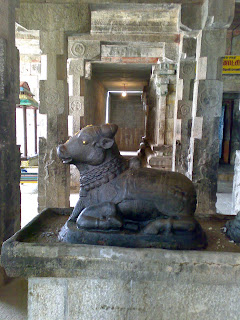 Goddess Sri Meenakshi Amman is so beautifully decorated and has a separate shrine near the sanctum facing south. 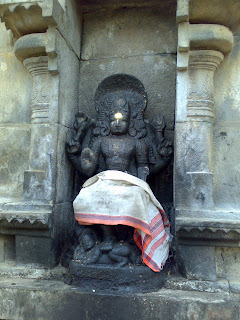 Koshta deities like Sri Dhakshinamurthy, Sri Brahma and Sri Durgai are present around the sanctum. 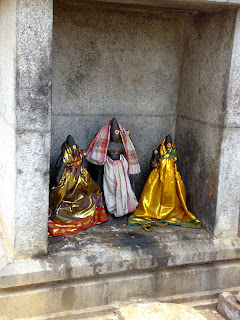 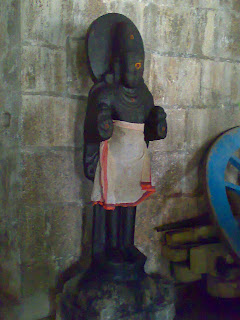 Sri Surya Bhagawan and Sri Chandra Bhagawan are seen in front of the sanctum, facing the Lord. 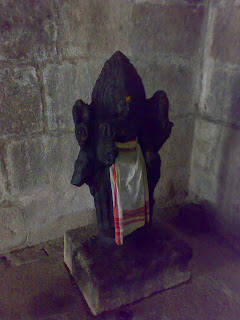 Sri Bhairavar is present at the corner at the praakaaram around the Ambaal Shrine. 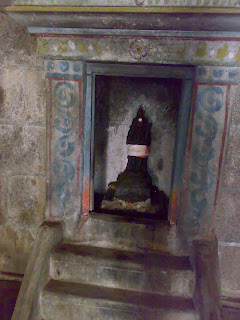 There is a small shrine for Sri Kootruva Naayanaar who is said to have lived in this village, worshipping Lord Shiva here. 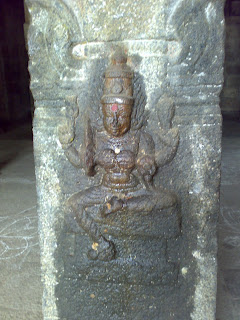 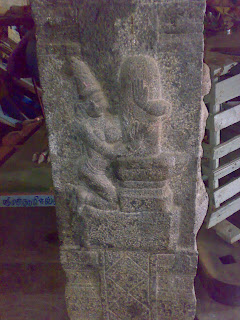 There are many beautiful sculptures found on many of the pillars of the mandapam in front of the sanctum. There are also many inscriptions found on the walls of the temple. 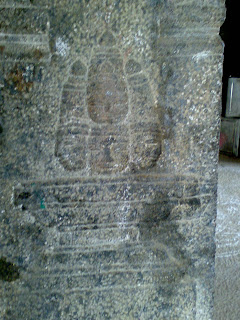 There is a beautiful Panchamuga (5 headed) Lingam carved on one of those pillars. 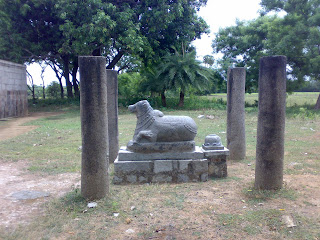 Outside the compound wall of the temple, a huge and majestic Nandhi is found facing the Lord towards the sanctum. But the wall obstructs the Nandhi from facing the Lord. There are 4 strong pillars around the Nandhi which might have been the pillars for Nandhi Mandapam in ancient days.

The priest visits the temple only in the morning and evening for daily poojas to be performed. As there are no much of visitors, the priest leaves after his poojas. The temple is open and the sanctum is closed during the day. One can have dharshan of the Lord through the closed grill door at the sanctum. One will be lucky if the priest is present to perform a Haarathi to the Lord. 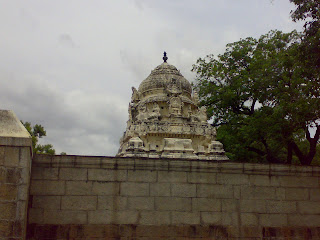 But during our visit the priest wasn’t around and we thought he must have carried the God’s Prasaadham to some king!!