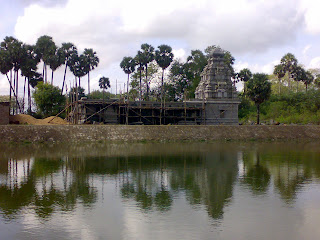 Ezhuchur is a small, beautiful village located about 57 kms south west of Chennai, on the road connecting Tambaram and Kanchipuram. While going from Tambaram, after Padappai, there is a junction called Orakadam Cross Road (Koot Road). There is a Mahameru Dhyana Nilayam about 3 kms from Orakadam Cross Road. One has to take left on the narrow road adjacent to Mahameru temple and go further about 3 kms inside to reach this village.

There is a marvelous and ancient temple for Lord Shiva at Ezhuchur. The main deity here is called Sri Nallinakkeeswarar. Nallinakkeeswarar (நல்லிணக்கீஸ்வரர்) means ‘God of harmony’. Goddess here is Sri Deivanaayagi. The temple is about 1100 years old, dating back to the Chozha period. 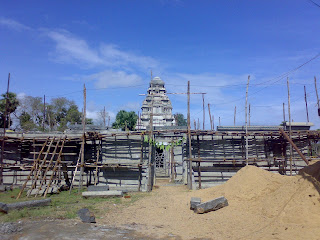 This temple is said to have undergone its last Kumbhabhishekam (consecration) during 1948 after which it got dilapidated. Many trees, plants and bushes were covering the temple for so many years. The native villagers have then taken initiative to completely rebuild the temple again, as it was. It is said that they got a divine instruction that the temple must be completely a stone structure and with much difficulty they are constructing a stone temple itself, starting from year 2000. Now the temple is nearing the finish with about 60% of the work completed.

Some stone inscriptions were found in the temple on couple of stone slabs, which revealed the age and history of this temple. According to a study done by Archeological Survey of India, the temple dates back to 920 A.D. Inscriptions reveal the details of this temple during the 13th year of reign of a Chozha King ‘Koppara Kesari Panmar’ (கோப்பர கேசரி பன்மார்) identified as Paranthaka Chozha 1 and this village was then called as ‘Velimaa Nallur’ (வெளிமா நல்லூர்).

During this period, a local administrative head called Nochi Kizhaan Kaliya Perumaan (நொச்சி கிழான் கலிய பெருமான்) belonging to the village Velimaa Nallur of Velimaa Nallur Naadu, a sub division of Ootrukkaattu Kottam handed over gold to the native Naattaar (நாட்டார்) to build the temple (During the said period agriculturists were called Naattaars). Inscriptions also reveal that the Naattaar has to take responsibility to build the temple in this village using the given gold, failing which they have to pay a fine of ‘Manjaadi Pon’ (மண் ஜாடி பொன்- a pot full of gold) to the king. 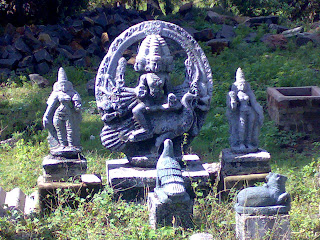 As per the inscriptions, it was found that, this village was called as Velimaa Nallur which was under Ootrukkaattu Kottam and this village itself had been the head quarter for this region (Naadu).

There is also a copper epigraph which was found in the temple belonging to 1429 AD. According to this copper inscription, there was a Vijayanagara King called ‘Veera Narasimha’. He had admirations to this temple and the village. During his period, a seer called ‘Sri Vyaasaachala Mahadeva Saraswathi Swamigal’ is said to have headed the present Kanchi Mutt as 54th Peetadhipadhi in the lineage. 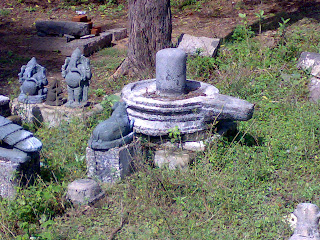 The copper epigraph says that ‘the king Veera Narasimha seated on a jeweled throne on the banks of the river Thungabadhra, gifted Ezhuchur and Venpaakkam villages to ‘Sri Vyaasaachala Mahadeva Saraswathi Swamigal’. 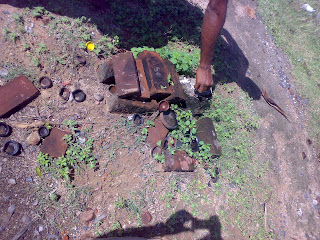 The seer is said to have worshipped the Lord here and also attained ‘Mukthi’ at this place. The Adhishtaanam (Samadhi) of ‘Sri Vyaasaachala Mahadeva Saraswathi Swamigal’ is also found in the temple at south west of the sanctum. The idol of Sri Chandhramouleeswarar (Lingam) is also found in the temple which was originally found placed on the Adhishtaanam. Now some bricks and lamps are kept there for identification. 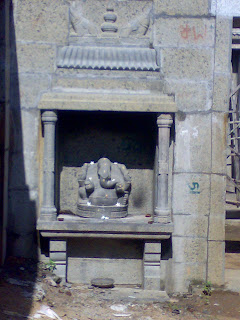 The main deity Sri Nallinakkeeswarar is in the form of a grand Shiva Lingam, facing east. Sri Ganapathy is seen at the entrance of the sanctum. A shrine for Ambaal, Sri Deivanaayagi is at the left side of the sanctum, facing south. Opposite Ambaal shrine, a shrine for Sri Shanmugar is being constructed. 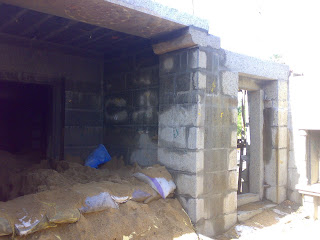 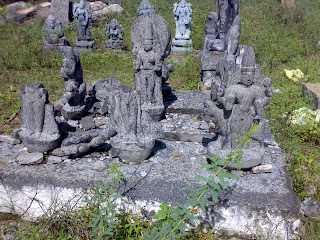 Navagrahams are present with their respective Vaahanams; a few of them are in damaged condition. 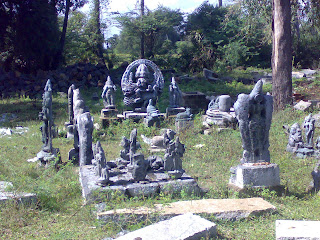 All the deities are so beautiful and temporarily kept aside the temple which looks like a conference going on among Gods. 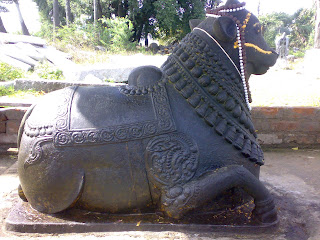 The most important of all here is the fantastic Nandhi. The Nandhi here is said to be very unique and not found anywhere else. This Nandhi is called as ‘Rajo Guna’ Nandhi. This peculiar Nandhi has beautiful ornaments and clothing, all carved on it. One of the forelegs is folded backwards and other one is in stretched position. 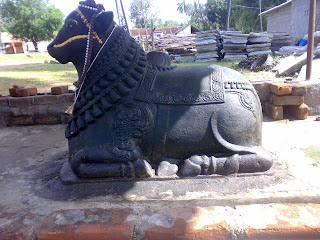 Of the hind legs, one is folded while another leg goes beneath its stomach and this leg is seen jutting out on the other side. Similarly the tail goes underneath the belly and stretches out on its left side. 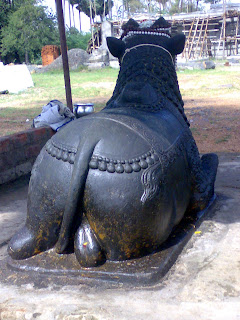 Nandhi is wearing elaborate ornaments around its neck. It wears garlands made of Rudhraaksha, an Iron chain, Salangai and a garland made of bells. Nandhi also adorns a beautiful Nethi Chutti (an ornament meant for forehead) on its forehead. It has a beautifully carved Vasthram (shawl) covering it and an ‘Ottiyaanam’ (hip ornament) too. Yaazhi is beautifully sculpted just above the legs. 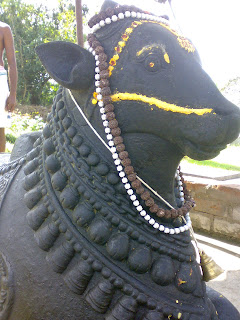 It is sculpted with minutest of details as even the row of teeth of the Nandhi is so accurate. Nandhi is seen curling its tongue out reaching to its nostril on the right side. It is said that such posture is called ‘Pranayama Kolam’ (doing breathing exercise). Also the ears of the Nandhi are sculpted sharply in an unusually erect shape. It is said that the Nandhigeswarar here is in the posture of doing Prayanama and listening to the Gayathri Manthra.

It is said that Sri Jayendhra Saraswathi Swamigal of Kanchi mutt had visited this temple, got so fascinated by this beautiful Nandhi and also was reported to have said that he had not seen such a beautifully sculpted Nandhi anywhere else. 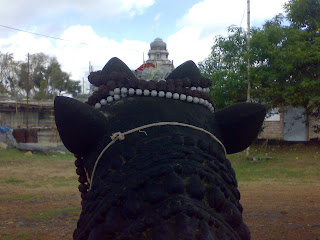 Thus, the Nandhi here gains much of admiration and stands as a masterpiece to the architectural excellence of our ancestors. One will need at least 5 to 10 minutes to go around and admire this Nandhi in detail. 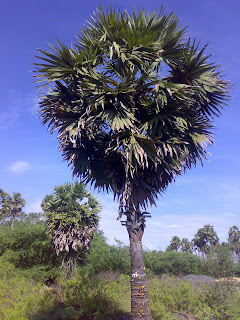 There are 3 Sthala Virukshams for this temple. ‘Pen Panai Maram’ (female Palm tree) is found behind the sanctum at the western side. 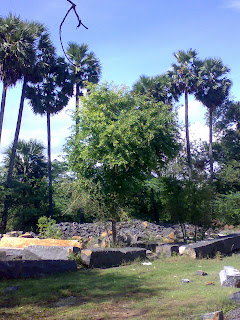 ‘Vilvam’ is found at the southern side of the temple. 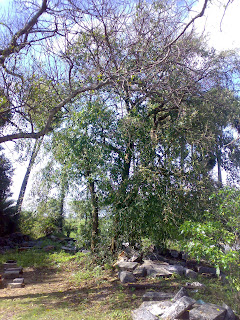 ‘Eru Azhinjal tree’ (ஏறு அழிஞ்சல்), also called Angola tree, which is considered most sacred and medicinal is another Sthala Viruksham here and is on the south east side of the sanctum. 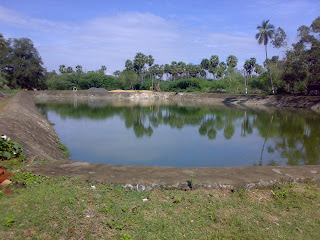 The Theertham for this temple is called ‘Kamala Theertham’ (தாமரைக்குளம்), which spreads on a vast area and looks so beautiful. This water from this pond is said to have medicinal properties. There are a few steps to go down to the Theertham here. Hollow carvings are found on both sides of the stone steps, to pour oil and light the lamps during festivals.

Sri Nallinakkeeswarar blesses the devotees for marriage, child birth and harmony within the family. 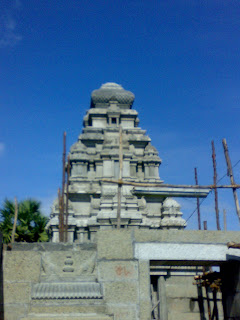 The people of Ezhuchur have formed a trust called “Namasivaya Arakkattalai” headed by Sri. Krishna Kumar (a native of Ezhuchur) as the Chairman and are engaged in rebuilding the whole temple with the same elegance as it was. The trust also seeks funds for completion of works. The trust shall be contacted at 5/9, 2nd street, Ramakrishna Nagar, Chitlapakkam, Chennai – 600 064. Tel: 91 - 44 - 2223 3857 / 94443 49009.

Most importantly the trust invites people to visit the temple and experience the divinity and heritage here.

Posted by Dhivya Dharsanam at 4:59 PM