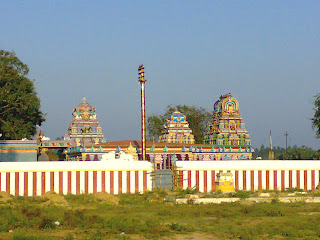 Ariyathurai village is located off the Chennai – Kolkota highway and about 50 kms from Chennai. While going from Chennai, there is a junction called Thachur cross road. After crossing this junction, one has to go further about 2-3 kms to reach Kavarappettai where one Durga Devi Polytechnic is seen. Opposite to this polytechnic, one has to take left from the highway and go about 3 kms inside to reach this temple.

Ariyathurai has an ancient temple for Lord Shiva, which is said to be about 6000 years old. The main deity here is Sri Varamoortheeswarar and Goddess Sri Maragatha Valli. The name of the place Ariyathurai (அரியதுறை) itself signifies the inimitable value of the village. In Thamizh ‘Ariya’ means ‘rare’ and ‘Thurai’ means ‘a place on the river bank’.

Lord Shiva has 5 faces; Isaanam, Thathpurusham, Vaamadhevam, Sathyojaatham and Agoram. There are 5 Shiva temples (called Pancha Brahma Sthalams) near Chennai, representing each of the 5 faces of the Lord. Out of 5, this temple represents the 'Sathyojaatha' face of Lord Shiva. 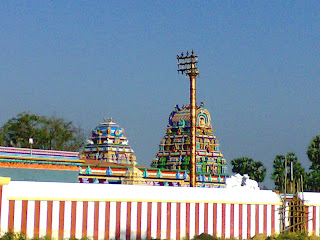 This temple is located on the banks of river Arani, which is also called as Brahmaaranya Theertham. According to the legend, this river is believed to be created by Lord Brahma. It is said that once when an ancient sage called Romasa Rishi wanted to perform a Yagnya, Lord Brahma churned the Arani trees to create fire. After the fire evolved from the friction, water started flowing due to churning, which ran through this place and came to be known as Brahmaaranya River. 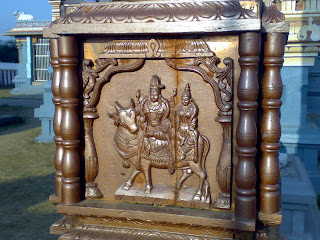 It is believed that Romasa Rishi worshipped the Lord here for over 100 years. Lord Shiva appeared to Him and the Rishi prayed the Lord to take abode here in Ariyathurai and bless the world. Lord Shiva was pleased with the Rishi’s worship and took abode here.

There was another sage called Mukundha Rishi who also is said to have stayed in this place for many years and worshipped the Lord here. After few years of worship, Mukundha Rishi wanted to go on a pilgrimage to Kaasi (Varanasi) and prepared to leave Ariyathurai. He heard a holy voice of Lord Shiva asking him not to leave Ariyathurai and said that the Holy Ganges will flow on the banks of Brahmaaranya River itself for the Rishi to take the holy dip.

A small spring of water had originated on the banks of river Arani. Mukundha Rishi with much joy took holy dip in the Ganges and worshipped Lord Shiva. Lord Shiva gave dharshan to him as Bhairavar. He requested Lord Shiva that the spring of Ganges should flow in this village perennially so that people who are not able to make it to Kaasi can visit Ariyathurai to have bath in Ganges. The Lord agreed and the spring of Ganges is flowing there till today. 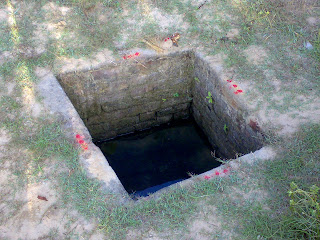 There is a small square trench found on the river bank, little away from the temple, in which the water is originating from it. It is said that even when the river Arani dries up, this holy Ganges fountain never dries. Kanchi Paramachaarya Sri Chandrasekarendhra Saraswathi Swamigal had visited Ariyathurai during 1965 and bathed in this holy water. It is said that worshipping the Lord at Ariyathurai is equivalent to worshipping Him at Kaasi (Varanasi).

There lived a king called Chithrasenan who was childless and Goddess Maragatha Valli Herself was born to him. After she grew up, the king arranged for the Swayamvaram for the princess. Lord Shiva went to the palace, brought the Goddess here on a horse and took abode.

Knowing this, the king along with his troupes came chasing and reached here. Nandhigeswarar stopped them from entering the temple and the God gave dharshan to them along with Sri Maragatha Valli. Then the king was made to realize that the Goddess Herself was born to him and she had reached the right place. 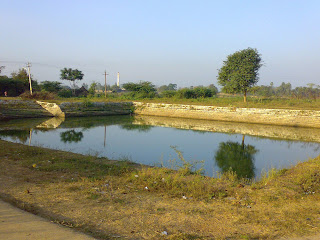 There is a beautiful pond near the temple which serves as the Theertham for the temple. This temple tank was built by a local land lord. It is said that there lived a beautiful Devadasi in this village, who was an ardent devotee of Sri Varamoortheeswarar. The land lord was fascinated by her beauty and proposed to her for his pleasure. Devadasi agreed with a condition that the land lord must build a tank for this temple after which she would agree to be with him. The land lord fulfilled her wish by building a beautiful tank for the temple and went eagerly to meet her. To his shock, he was only able to find her dead to reach the feet of Lord. 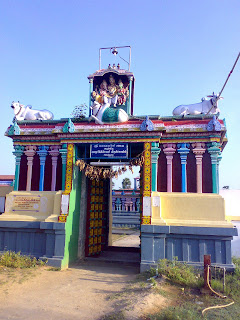 The temple is constructed beautifully on the banks of river Arani. This temple is facing south. Temples facing south are called ‘Parihaara Sthalams’ meant for finding remedies to one’s problems.

The main deity ‘Sri Varamoortheeswarar’ is seen facing east. Goddess Sri Maragatha Valli is facing south. The main deity here is said to represent the ‘Sadhyojaatha’ face of Lord Shiva. The Aavudaiyaar (base) of the Lingam is of square in shape. It is said that the Shiva Lingams which were installed by Rishis or Sages would have the Aavudaiyaar in square shape. 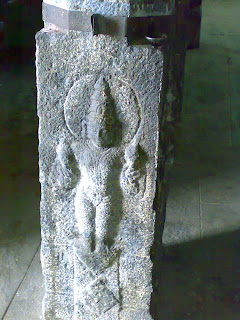 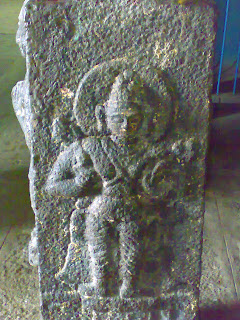 This temple does not have Navagrahams. Instead, Sri Surya Bhagavan (Sun God) and Sri Chandra Bhagavan (Moon God) are seen on the pillars just outside the sanctum, facing the Lord.

Kaala Bhairavar is present in the Ardha Mandapam and is a Swayambhu murthy (self evolved). 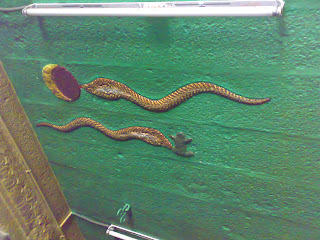 There are carvings of the images of snakes on the ceiling of the mandapam outside the sanctum, which indicates that this temple is meant to find remedies for Sarpa Dhosham or Naga Dhosham. 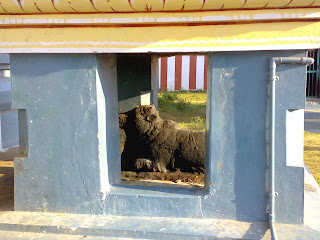 An ancient Nandhi is seen on the outer praakaaram facing the sanctum. 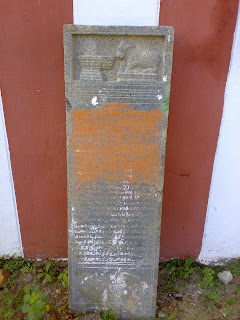 A stone slab containing some old inscriptions is kept on the outer praakaaram. 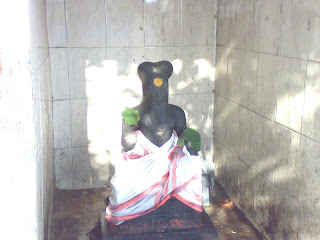 There is also a small shrine for Romasa Rishi just behind the temple. Ariyathurai certainly lives up to its name having many rare features.
Posted by Dhivya Dharsanam at 6:19 PM