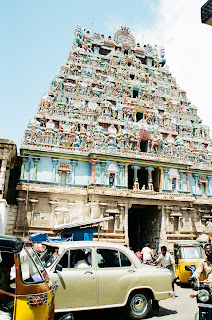 Thiruvaanaikkaa is located about 15 minutes drive from Trichiraappalli (Trichy) city on the way to Sri Rangam, situated near the banks of Cauvery.

This is one among the five Pancha Boodha (Five Elements) Sthalams for Lord Shiva. This temple is called as Appu Sthalam meant for Water among five elements. Whenever the water level rises in river Cauvery, the Shiva Linga here gets submerged in waters in the sanctum. This place was known as Gajaaranyam in ancient days.

The God here is Sri Jambugeswarar and Goddess Sri Akilaandeswari. 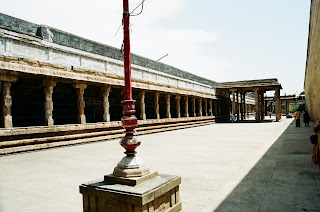 This ancient temple has a peculiar background with an interesting story behind it.

According to legend, there lived a saint called Jambu Rishi, who was an ardent devotee of Lord Shiva. He once found a very rare fruit called “Venn Naaval Pazham” (white Naaval fruit) and he offered it to Lord Shiva. Lord Shiva ate the fruit and spitted out the seed of the fruit. 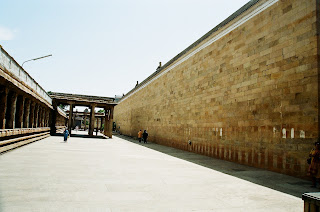 Out of his overwhelming Bhakthi, Jambu Rishi ate the seed, because of its sacred nature as it came out of Lord Shiva’s mouth. The seed which he ate started growing as a Naaval tree from the Rishi’s head. The Rishi prayed Lord Shiva to take abode and settle under the tree. The Lord agreed to him and said that, a time will come when I would come and settle under this Naaval Tree. This place then came to be known as Jambugeswaram.

Parvathi Devi once playfully disturbed the penance of Lord Shiva. The God got angry with her and asked her to go to earth and perform penance. Parvathi Devi came down to earth as Akilaandeswari and found this place Jambugeswaram most suitable for her prayers. She took water from river Cauvery and made a Shiva Linga out of it, erected it under the same “Venn Naaval” tree which evolved out of Jambu Maharishi’s head and started worshipping. As She made the Shiva Lingam out of water, this came to be known as Appu Lingam (Water Lingam) among Pancha Boodha Lingams. 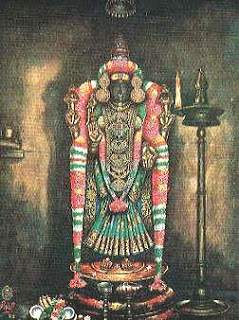 Lord Shiva was pleased with Devi’s worship and gave Dharshan to her here. He also taught her Siva Gnana to her in this place. She faced east and took Upadesam from Lord Shiva who was facing west. Similarly, the Sri Jambugeswarar and Sri Akilaandeswari idols in this temple also face the same directions.

Pushpadhantha, as an elephant was wandering in Jambugeswaram. He found the Shiva Linga under the Venn Naaval tree. Out of his devotion, he went and brought water from Cauvery in his trunk and bathed the Lord, cleaned up the place and offered flowers to Lord Shiva.

Maalyavaan who was born as the Spider saw Lord Shiva at this place and weaved a web above God’s head providing Him the Shelter from the falling dry leaves and the hot sun.

Next day the elephant came and saw the web near Lord Shiva and got angry with the spider as the web is made of spider’s saliva which is believed to be unclean in the God’s premises. The elephant blew away the web woven by the spider and again cleaned the place with water and decorated with flowers. 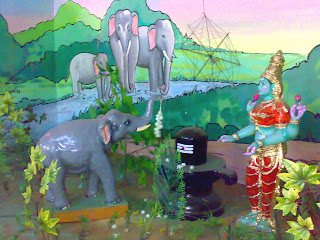 This act continued for few days repeatedly by both of them. One day out of anger, the spider wanted to stop the elephant from spoiling his offering to God. The spider entered into the trunk of the elephant and bit it to death. The Elephant with much pain squeezed the trunk and the spider too died. After their death, they again reached Kailash, where God advised them that each one has got a form of worship and none is superior to the other. God also relieved both from their curses and blessed them.

As the elephant worshipped the God here, this place got its name as “Thiruvaanaikkaa”. (Thiru means God, Aanai means Elephant and Kaa means Forest) which later got corrupted through times as Thiruvaanaikkaaval and Thiruvaanaikkovil. 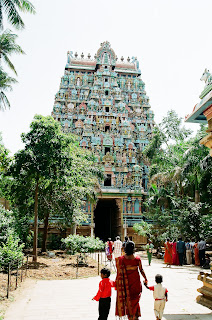 It is also believed that Maalyavaan took his next birth as a Chola King called Ko Chengannan (means King with red eyes). He was highly victorious as a king, but wanted to serve the Lord for rest of his life and has built around 70 Shiva Temples and Thiruvaanaikkaa is the first among them, built during 1st Century B.C. Ko Chengannan is also one among the 63 Nayanmars.

Out of his experience with an elephant in his earlier birth, he made the sanctum of Thiruvaanaikkaa temple with its entrance too small so that even a smallest of elephants cannot enter inside. The entrance of the sanctum measures just 4 ft height and 2.5 ft width.

All the Naalvars, Appar, Sundarar, Gnaana Sambandar and Manicka Vaasagar have sung in hymns here. Arunagirinaathar in his Thiruppugazh has sung praise on Lord Muruga here. Muthuswamy Dheekshidhar, the one among three Sangeetha Mummurthys has composed few great and rare compositions on the God and Goddess here.

Jagadguru Aadhi Sankaraachaarya has visited this temple and worshipped Goddess Akilaandeswari here. He also reduced the Ugram (fierce) of the Goddess here by offering her a pair of “Thadagams” (ear rings) made of Sri Chakra, which is not found anywhere else. Also he installed Prasanna Vinayagar in front of the Goddess’s Shrine to bring down her ferocity, so that the Goddess looks on with a graceful sight.

As Goddess Akilaandeswari worshipped Lord Shiva here, the Uchi Kaala Pooja (during noon) is performed to Lord Shiva by the priest, who dresses up himself in a Saree, like a female.

As Akilaandeswari took Upadesam as a student from the Lord here, this place is an Upadesa Sthalam and hence, no wedding is performed here for the God and Goddess.

Beautiful, vast temple with its unique history combined with stunning architecture all over.

Trichy is well connected by trains and buses. Buses and taxis are available in plenty from Trichy Chathram Bus Stand to Thiruvanaikkaa Temple itself.
Posted by Dhivya Dharsanam at 6:09 PM