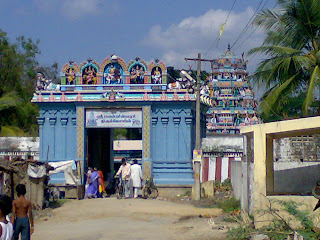 Maangaadu is a small beautiful village located at the outskirts of Chennai near Poondhamalli. While going from Chennai city on Mount Poondhamalli road, one has to take left from Kumananchaavadi junction to reach Maangaadu.

This temple is located very close to Maangaadu Sri Kamakshi Amman temple. This is a very ancient and beautiful temple for Lord Shiva. The main deity here is Sri Velleeswarar. There is no Ambaal in this temple, as Sri Kamakshi Amman is present nearby. 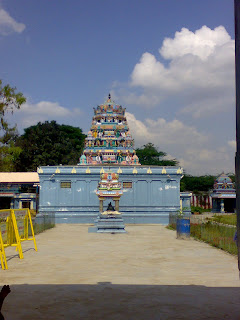 According to the legend, when Goddess Sri Kamakshi performed Thapas here in Maangaadu, Lord Shiva came down to earth to give dharshan to Her and marry Her. It is said that, Sri Sukran (Venus) worshipped Lord Shiva here. When Sri Kamakshi came here to have dharshan of Lord Shiva, she saw Sri Sukran worshipping the Lord. The Goddess went back as She did not want to disturb the prayers of Sukran.

Later Lord Shiva directed the Goddess to come to Kanchipuram and married Her there. As Sri Sukran (Velli in Thamizh) worshipped Lord Shiva here, the Lord came to be known as Sri Velleeswarar and also called as Sri Bhaargaveswarar.

The main deity Sri Velleeswarar is huge and looks very grand, facing east. Lord Ganesha and Lord Muruga are seen at either side of the entrance of the sanctum. Lord Ganesha here is holding a Mango fruit in His hand and is called ‘Maangani Vinayagar’. The place Maangaadu itself had got its name as it was once a vast Mango forest. 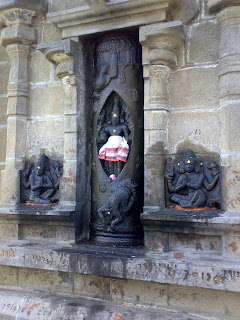 Lingothbavar is seen on the outer wall behind the sanctum. Lord Brahma and Lord Vishnu are present on either side of Lingothbavar worshipping Him. 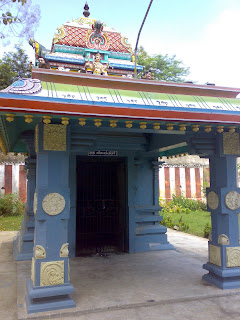 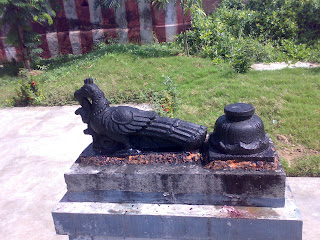 Sri Subramanyar shrine is present at the North West side of the outer praakaaram. Sri Subramanyar is so beautiful and seen with His consorts Sri Valli and Sri Dhevasena. All the 3 deities are made of a single stone. Lord Muruga’s Vaahanam (carrier) peacock is present outside the shrine facing the shrine. 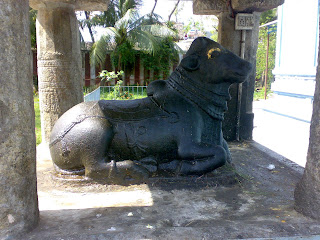 A beautiful Nandhi is present outside the sanctum, facing towards west. It is said that people visiting Sri Kamakshi Amman temple should also have dharshan at Sri Velleeswarar temple and Sri Vaikunda Perumaal temple in Maangaadu, as all these three temples are interconnected with the history of Sri Kamakshi Amman.
Posted by Dhivya Dharsanam at 12:46 PM