Pallikonda is a very small village located about 24 kms from Vellore on the Bangalore Highway. Situated on the banks of Palar river, it houses a very beautiful and one of the most ancient Sri Uthara Ranganathar Temple.

According to the Sthala History, there lived a king called Amba Raja who was ruling this part of the country called Thiruvedhimangalam (today’s Pallikonda). He has been highly victorious and was enjoying all the worldly pleasures as a king. Having fed up with materialistic life, he one day realized that the purpose of his birth is only to get the Dharshan of Sri Maha Vishnu.

He started worshipping Maha Vishnu for years together and was eagerly waiting to have his Dharshan. Years rolled by. But there was no sign of God appearing to him. He got frustrated and attempted suicide. While he was trying to commit suicide, a heavenly voice from the sky told him to be patient and to continue his prayers so that he will soon get the dharshan of God.

The king became happy and continued his worships.

During the same time a debate came up in the Lord Brahma’s court hall (Brahma Sabha). It was about, who is the greatest among Durga (for courage), Lakshmi (for wealth) and Saraswathi (for wisdom). After a long debate, Lord Brahma gave a conclusion that Lakshmi is the supreme.

Hearing this, Saraswathi got angry and walked away, leaving Brahma. Brahma tried convincing her and failed. Brahma went and prayed Lord Vishnu asking for a solution as he cannot live without Saraswathi. Lord Vishnu assured that he will try to bring down her anger.

Saraswathi took the form of a river named Vegavathi and started flowing through. Trying to stop her, Lord Vishnu lied in a reclining pose (Ranganathar) at Thiruvedhimangalam (Pallikonda). Knowing this, Saraswathi bypassed him adjacent to his feet and moved further.

Lord Vishnu again went to another place along her route and stayed again in a reclining posture. This time Saraswathi cleverly bypassed him again above his head and went on.

Lord Vishnu decided to stop her some how and went and rested in another place again in the same posture obstructing her way. This time Saraswathi had to face Lord Vishnu obstructing her and was not able to move further beyond Him, as he is the supreme. Saraswathi’s anger subsided and she went into the earth at this third place where Lord Ranganatha reclined.

After this event, as Amba Raja was worshipping eagerly to have His Dharshan, Lord Vishnu came back to Pallikonda and gave Dharshan to Amba Raja.

The king asked for a boon that the God should settle here and give Dharshan to everyone visiting this place. As the God settled here during his act of uniting Brahma and Saraswathi, the king prayed that He should grant boon for unmarried people and the separated couples visiting here.

The first place where Lord Ranganatha tried stopping Saraswathi who was flowing as river Vegavathi (today’s Palar) is today’s Pallikonda. Here Palar flows at the down side of the Lord’s feet.

The second place where he attempted to stop her is called Thiruppaarkadal now, near Kaverippaakkam on the Bangalore highway. Here there is a Lord Ranganathar temple where Palar passes on the head side of the lord.

The third place where he finally stopped the river is called Thiruvekka, which is in Kanchipuram. There’s another Lord Ranganathar temple here again.

In all the three places Lord Vishnu is seen in the reclined posture as Lord Ranganathar.

In Pallikonda Lord, Ranganathar gives Dharshan with Sri Ranganayaki on the banks of the river Vegavathi (today’s Palar). Also seen are Sri Devi and Bhu Devi. 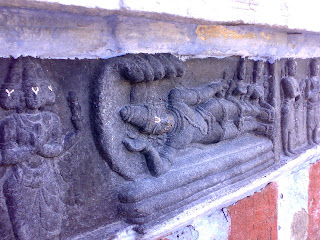 This temple is said to have built by Vijayanagara Kings during 5th Century. Other deities of the temple like Lord Rama, Garuda, etc., have been built at various stages by many kings who ruled here. But Lord Ranganathar is said to be the Aadhi Moolavar which was excavated from the banks of the river and built by Vijayanagara Kings and Sambuvarayars.

Situated on the river bank, in an ancient village with serene atmosphere, Sri Ranganathar temple stands tall, blessing many generations.

Festivals like Vaikunda Ekadasi are celebrated well here. Though so ancient and rare of its kind, this temple is in the state of neglect now.

A grand Kumbhabhishekam and renovated Rajagopuram are planned during early 2008 and this temple welcomes contributions from devotees who wish to be part of this noble cause.