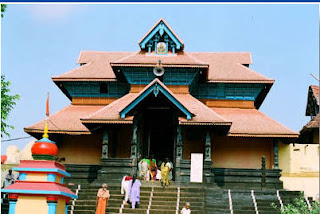 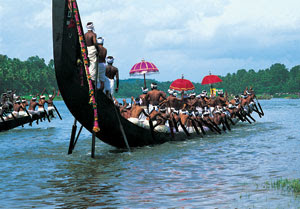 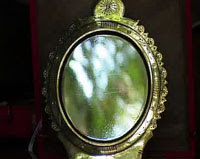 The Temple
One of the ancient and among the 108 Dhivya Dhesams "Aranmula", a beautiful village, is located near Chengannur (Kerala).

In Tamil the village was called as "Thiruvaaranvilai" and the main diety as "Thirukkuralappan".

River Pampa flowing through this village just next to the temple is a boon to watch.
According to the legend, the 5 Pandava princes after their period, crowned their heir Parikshit as the king and left on a pilgrimage throughout the country. And when they were in Kerala each one of the brothers created a temple and installed Vishnu and worshipped.

It is said that Arjuna initially made this Vishnu at Nilakkal near Sabarimalai and then it was brought here on a raft (boat) made out of 6 pieces of bamboo. And hence the name Aranmula (means 6 pieces of bamboo).

It is beleived that Arjuna built this temple to releive himself of the sin for having killed Karna, who was Nirayuthapani (Weaponless) on the battelfield. According to Dharma one is not supposed to kill an unarmed enemy in the battle.

The temple is constructed on a vast landscape and has 4 towers over its entrances on the outer Praakaram. The entrance of eastern tower has a flight of 18 steps. On the northern gate, if you step down, you will reach Pampa river.

During the malayalam month of Meenam, Aranmula witnesses a grand festival where Aranmula Parthasarathy is taken in a grand procession on Garuda (Garuda Vaahanam) while an image of Bhagawathi from the nearby Punnamthode temple is brought in procession for the Aarattu festival.


Unique features
Aranmula located just few kms from Pandhalam, the birth place of Lord Ayyappan. Till today, every year, when the Sacred Jewels (Thiruvabharanam) is carried from Pandhalam to Sabarimalai by foot traditionally, the jewels are kept here for rituals, and then proceeded to Sabarimalai.

Boat Race (Vallam Kali) is another major attraction in the Pampa river of Aranmula. Every year during Onam festival participants come from all parts of Kerala to participate in the Race. Snake shaped boats (about 100 ft length with 100 rowers 25 singers), well decorated and ready for racing are present here during Onam days.

Many foriegn tourists visit this place during Onam for watching this event. Its a feast to watch this event.

Aranmula is also famous for its metal mirrors made of a kind of bell metal, popularly known as "Aranmula Kannadi". Invented during 18th Century, these unique mirrors are not found anywhere else in the world. Made by a mysterious blend of bronze waxed into crystal clear mirrors is a produce of a few families in Aranmula where the production details are held secret and passed down only to their family generations. Metal mirrors are not made made with any form of glass but using bell metal alloy.


How to reach
Aranmula is situated 9 kms at the west of Chengannur. Chengannur is well connected by road and trains. Take a bus from Chengannur to Aranmula. Ask for "Aranmula Ambalam" where almost every bus stops in front of this temple. Also accessible from Pathanmthitta by bus.
Posted by Dhivya Dharsanam at 12:41 PM