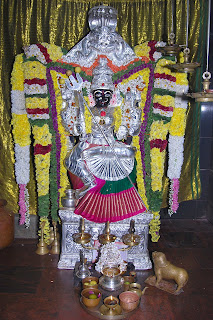 Gudiyatham is a municipal town situated in Vellore District (North Arcot Dt), 32 kms from Vellore. One has to take the Bangalore Highway from Vellore and turn right at Pallikonda and go about 12 kms to reach Gudiyatham. Gudiyatham has about 500 villages surrounding it.
The name of the town Gudiyatham has arrived from the word ‘Kudiyetram’ (குடியேற்றம்) which in Thamizh means ‘surging population’. It is said that, Kulothunga Chozha cleared some forest, made people settle here and named the place as ‘Kudiyetra Nallur’ (குடியேற்ற நல்லூர்), which is believed to be the ancient name of this town. This place also was called as ‘Jayamkonda Chathurvedi Mangalam, as the king Kulothunga Chozhan donated this place after his victory over parts of Thondai Mandalam regions. Even today, the majority population of this town belongs to a community called ‘Sengunthar’ who were integral part of Chola army. 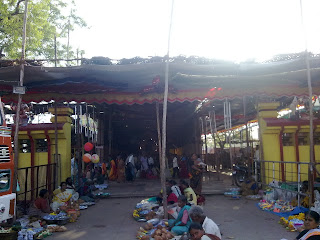 Even today, there is an ancient Shiva Temple by name ‘Karuppuleeswarar Temple’ which was built by Chozha Kings and the place in which the temple is located is called as ‘Nellorepet’ (நல்லூர்பேட்டை). Ancient inscriptions about this town belong to 1705 AD during Kulothungan’s 1st dynasty and few Vijayanagara kings at later stages.
The town is also popular with many other credits to itself. The Republic of India’s first National Flag was woven here by the weavers of this town, which was hoisted at the Red Fort in New Delhi. Also, the shape of Thiruvalluvar (by statue) was given by this people. Kamarajar won the elections from this constituency, when he became the Chief Minister of Tamilnadu. 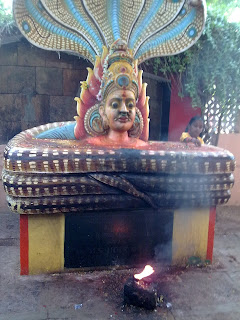 Gudiyatham is very popular for the temple it has for Sri Gangai Amman. Sri Gangai Amman temple is located at the heart of this town on the northern bank of the holy river Koundinya Mahanadhi. This river is believed to be the Ganges itself which came down to earth with the prayers of a Saint by name Koundinya Maharishi, who was a disciple of Sage Vasishtar. The legend has it that the Koundinya Rishi, to free himself from his sins came to this place, prayed Lord and brought the Ganges to flow through this place and worshipped Lord Shiva in this village (called Karuppuleeswarar). 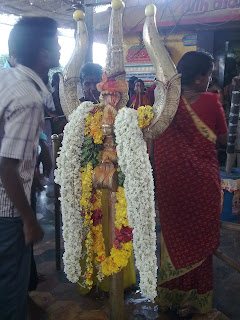 Sri Gangai Amman temple is connected with the legend of Padavedu Sri Renukambal temple. According to the legend, Sage Jamadhagni was performing Thapas in the forest. His wife Renukadevi, who was a Pathivritha, used to go to the nearby river, make a pot instantly out of the sand in the banks and fetch water for the Rishi’s daily pooja. Such were her powers.
Once when Renukadevi went to the river and when she was about to fill the water, she happened to see in the water, a reflected image of a handsome Gandharva, flying on top. He was too handsome, which made Sri Renukadevi’s thought stumble a moment. With this, her sanctity of being a Pathivritha was spoiled and the sand pot broke into pieces. She tried again and again to make another pot to fetch water, but failed.
Knowing this, Sage Jamadagni got furious with her and called his son Sage Parasurama and ordered him to chop off her head. Rishi Parasurama, who is an ardent disciple and obedient son of Jamadhagni, obeyed his order and went chasing his mother with his weapon. Renukadevi, frightened of being killed by her own son, went and hid herself inside a Chandal’s house, where the Chandal’s wife came forward to rescue Renukadevi and tried to stop Sage Parasurama. Parasurama got angry with the lady and chopped off both the lady and Renukadevi’s head. 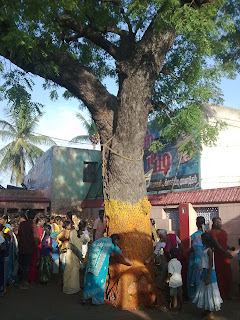 Sage Parasurama went to Sage Jamadagni and told him that he had fulfilled the wish of his father. Jamadhagni was too happy with his son and was willing to grant him a boon of his choice. Sage Parasurama humbly said that he wanted his mother up and alive again. Sage granted his wish and told him to fix the chopped head to the body of his mother to get her alive. Sage Parasurama went back to the Chandal’s house and by mistake, fixed the head of the Renukadevi on the Chandal lady’s body. Sri Renukadevi, came alive with the Chandal lady’s body and her own head. 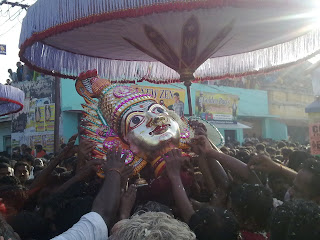 A major festival called ‘Gangai Amman Thiruvizha’ is celebrated in this town in a grand scale every year on the first day of the Thamizh month Vaikasi, which usually falls on May 14th or 15th. Sri Renukadevi is celebrated here as Sri Gangai Amman. 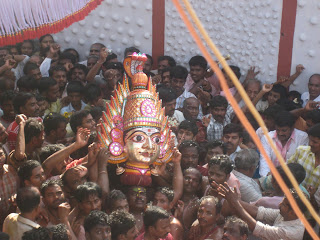 A beautiful temple Chariot is made to float around the city on the previous day to the festival.
Traditionally, the head of Sri Gangai Amman is made by a washerman’s family ancestrally, is carried on their head and brought to the temple by walk for about 3 kms. Inside the temple, the Amman’s head is fixed on the body which is kept for Dharshan during the day. 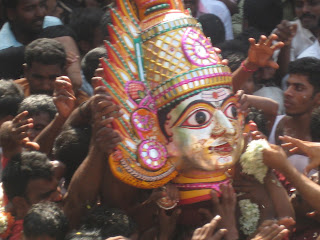 This event is popularly called as Sirasu (சிரசு, means head) festival. About a million people throng the town from various parts of the country to visit this event. Amman will be a feast to watch to see her being carried on the head, which will look like as if she is floating on the huge crowd of people. Various artistes from many villages will be performing throughout her way to the temple. One can see many village art forms like Karagam (கரகம்), Silambu (சிலம்பு), Puli Vesham (புலி வேஷம்) and many other martial arts being performed all her way to the temple. This is to symbolize that the Amman is so happy that she is going to get alive with the head which is going to be fixed on her body. 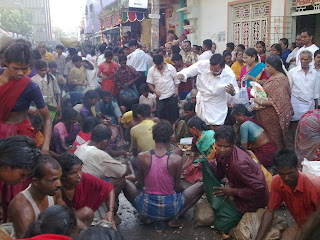 Breaking of coconuts in front of the Sirasu is considered a way of worship to the Amman. We can see lakhs of coconuts broken by the devotees all through her way to the temple. The entire road stretch of the procession can be seen drenched with coconut water. Many people like rag pickers make a life out of the broken coconuts as they gather and sell them off in the market and get their fortune once a year. 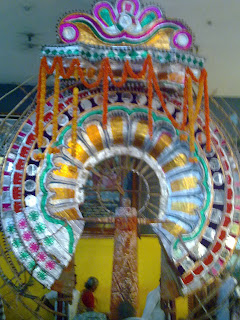 Also people pray and garland the Sirasu to get their wishes fulfilled. Gangai Amman is so powerful in granting the wishes of her devotees. After this grand procession the Sirasu is taken inside the temple and fixed on the body, where Amman gives Dharshan to the devotees all through the day. 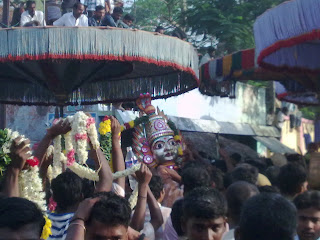 In the late evening, the head is again taken out of the body and carried in a procession, after which it gets immersed in the water and dissolved. This procession is again celebrated in a grand manner than her morning procession, as it is believed that Amman is going to her mother’s place after the festival. 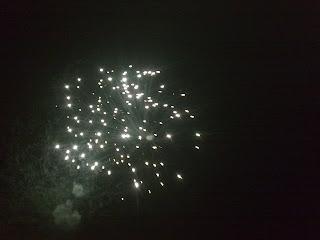 Major fireworks happen for more than 3 hours which is contributed by various people from the town and neighbouring places. One can know with the first shot of the cracker, which will be heard atleast to about 3 kms radius, that the Amman procession has started. 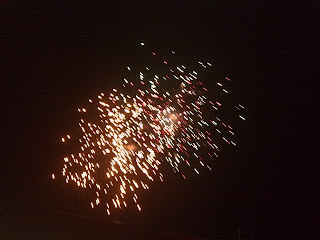 This colorful fireworks, popularly called as Vaana Vedikkai (வாணவேடிக்கை) is a major event by itself for the town, where lakhs of people witness from anywhere in the town, right from their terraces itself. 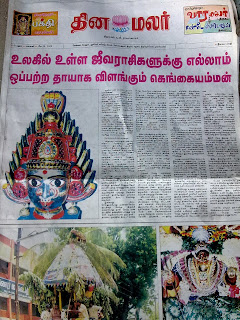 The next day, Gangai Amman is carried in a Chariot made full of flowers called Pushpa Pallakku (புஷ்பபல்லக்கு), which is very again a feast to watch. 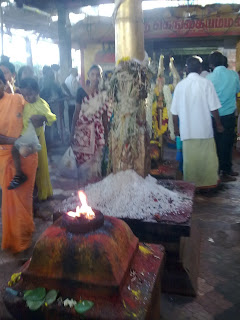 With this, the festival ends and the whole town awaits again for a year to watch this grand holy event. Gangai Amman festival is popular in the whole district, attracting lakhs of devotees every year. In fact, every house celebrates the event by distributing butter milk, water and ragi porridge (கூழ்) to the visiting pilgrims. One can see people from every house standing outside with something to offer to the people passing by, which are considered to be very auspicious. 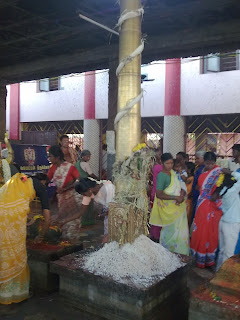 The temple has a small sanctum for Sri Gangai Amman and is developed in a bigger way with many shrines around the Praahaaram. 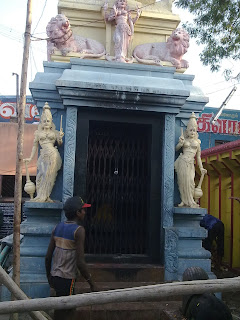 There is a separate shrine for Sri Koundinya Maharishi and Sri Ganga Devi. 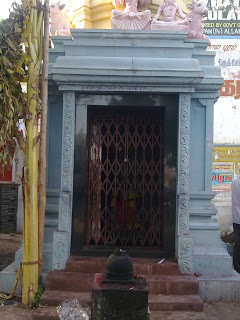 Vinayagar shrine is present on the left side of the entrance. 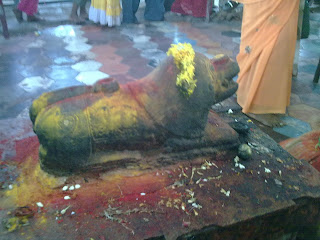 Sri Gangai Amman is believed to be blessing the native people without any scarcity of water and with good health. Like Samayapuram, one can see many people affected with small pox, staying in this temple till they get cured. The Goddess cures many such illnesses of people. People offer Salt and Pepper in the temple to get their illness cured.

Posted by Dhivya Dharsanam at 2:41 PM