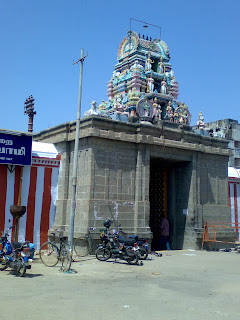 Koyambedu is situated at the north western side of Chennai. An ancient temple for Lord Shiva is located in Koyambedu where the main deity is Sri Kurungaaleeswarar and Goddess Sri Dharmasamvardhani (also called Aram Valartha Naayagi). 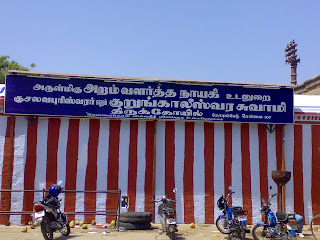 Inscriptions which date back to Kulothunga Chozha III and Vijayanagara kings, informs about various contributions made to the temple. Inscriptions also reveal the political bifurcation of the place as Kulothunga Chozha Valanadu, part of Puliyur Kottam belonging to Jayankonda Chozha Mandalam. 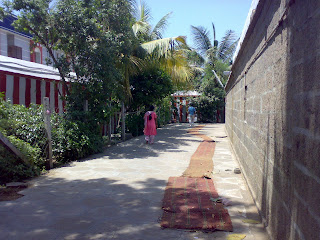 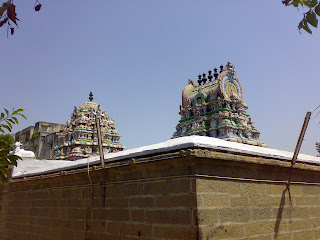 The main deity Sri Kurungaaleeswarar is also called as Sri Kusalavapureeswarar. It is said that Lava and Kusa, sons of Sri Rama stayed with Sage Valmiki in his Ashram along with their mother Sita Devi.

There are few other places too in and around Chennai like Thiruvaanmiyur and Siruvapuri, where Sage Valmiki had his Ashram when Lava and Kusa stayed with him.

The legend of this temple connects to Ramayana period, when Sita Devi was sent to forest by Sri Rama. Sita was under the care of Sage Sri Valmiki during that period and also gave birth to her 2 sons Lava and Kusa.

When Sri Rama sent the Aswamedha horse around the country, Lava and Kusa brought the horse to their custody. Without knowing that it was His sons who captured the horse, Sri Rama sent Lakshmana who fought a battle with them. As Lava and Kusa fought against their own uncle, they acquired a Dhosham called Gothra Dhosham. To be relieved of it, it is said that, they installed and worshipped Lord Shiva in this place.

The presiding deity Sri Kurungaaleeswarar is too small as it was installed by two small kids. This wonderful temple has stood strong across centuries and still has not lost its originality. 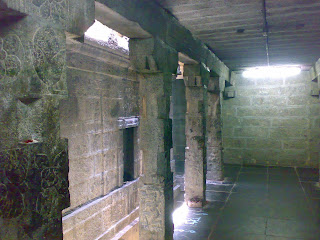 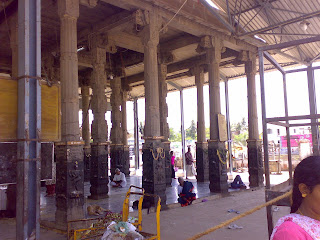 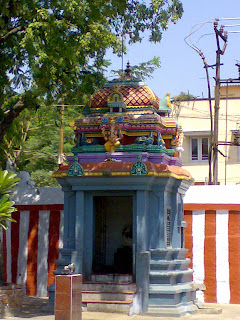 At the outer praakaaram Sri Vinayagar shrine is located at the south west corner of the temple. 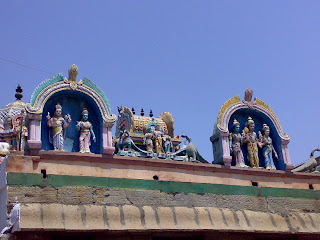 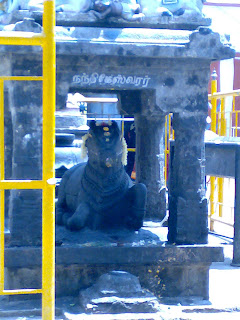 Sri Nandhigeswarar is seen on the outer praakaaram facing the presiding deity.

The temple also maintains a beautiful garden (Nandhavanam) along the outer praakaaram.

Ambaal Sri Dharmasamvardhani is beautiful and is seen in standing posture. 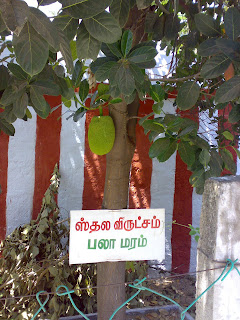 The Sthala Viruksham for this temple is ‘Palaa Maram’ (Jack tree) which is located on the outer praakaram. 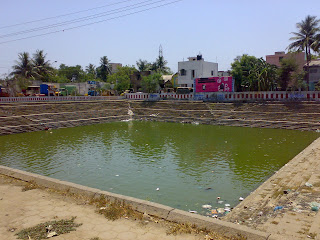 The theertham for this temple is called Lava Kusa Theertham which is believed to have been created by the two sons of Sri Rama. 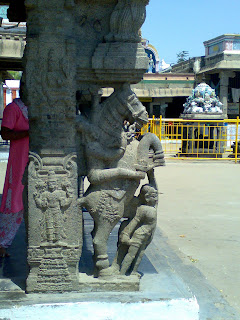 There are many beautiful sculptures all around the temple and on the pillars. 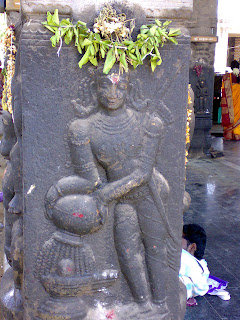 Few of them are Sri Rama performing Pooja to Lord Shiva, Lord Shiva punishing Yama to save Markandeyan and Kannappa Naayanar. 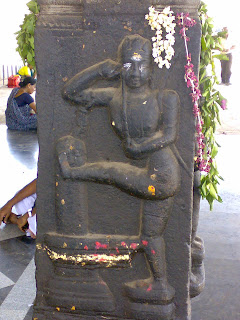 There is another temple adjacent to which is dedicated to Maha Vishnu called Sri Vaikunda Vaasa Perumal temple, which is again formed by Lava and Kusa.

Wonderful temple and worth visiting.
Posted by Dhivya Dharsanam at 8:16 PM